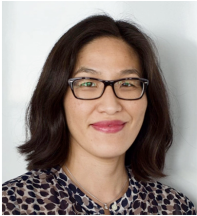 Soo La Kim is the Assistant Dean of Graduate Programs at Northwestern University. She has also worked in the writing programs at Princeton and Harvard, and began her career as an educator at the University of California, Irvine, where she earned a Ph.D. in English. Soo is also partners in the collaboration Teachers at the Center.

Born in Seoul, South Korea, Soo La immigrated to New York with her family when she was 6, and grew up in Queens and Long Island. She now lives in Evanston with her husband and two young sons.

Recently, when I picked up my 5-year-old from preschool, one of his teachers followed me to the door and told me that one of the moms had spanked her son in front of the whole class that day. Both mom and son are African American. Ms. K, herself African American, said she decided to talk about it with the kids because they’d all witnessed it, and explained to them how some people of color discipline that way. She went on to say some kids shared that they’d been spanked; others, like mine, said they’d never been spanked or that they’d had things taken away as punishment. I told her I appreciated her telling me, said I was sorry she was put in that position, said I know there are different opinions about spanking. But I had so many questions that I didn’t ask–like what happened afterward with both the mom and the boy, Q? Was the other teacher there? Did they report it? Did she really say, “some people of color discipline that way”?

With my husband at a work dinner, I had no one to talk to when I got home. So, I wrote about it on a racially diverse facebook group started by a friend to “dig deeper into race relations,” expressing my mixed feelings – confusion, discomfort, sympathy, sadness – and the many questions I hadn’t asked. Several people weighed in, and one encouraged me to let the teacher know that it wasn’t right to reinforce the pernicious stereotype of the African American community as more violent, especially with children so young. I thanked everyone, still not sure what I should or could do.

My first attempt to talk with Ms. K wasn’t effective, a last-minute impulse in the middle of the classroom. I asked her if there had been any follow up after the incident with Q, and she just shook her head and said “mm mm.” It was too public a setting and I let it go.

But I couldn’t let it go. The following week, I was co-presenting at an education conference on inclusive pedagogy with former colleagues and friends, including Dia. Afterwards, I shared the experience with them, too, including my failed attempt to speak up. I still don’t have the tools or experience to address such things in the moment, I said; I was conscious of the power dynamics of race and class in our relationship. But even as I was saying all this, I realized I was making excuses because I was afraid. And what was I afraid of? Butting into something that wasn’t my business. Seeming judgmental about someone else’s parenting or teaching. Ruining a good relationship with someone who cares for my child.

My friends listened and then told me the things I needed to hear. It was okay to bring it up again, they said. It’s not too late, and it’s too important to let go. Oppression in all its forms, including internalized oppression that accepts a legacy of violence, can’t be ignored. After all, we had just finished a workshop in which Dia had said, “discomfort is necessary for growth.” If I can’t speak up with someone I’m trusting to care for and educate my child, then what am I doing?

For the next few days, I rehearsed what I would say: “Hi, Ms. K, there’s something I’d like to talk to you about, do you have a few minutes? Can we talk outside?” Then, I saw her in the hallway outside my son’s classroom at pick-up time; I grabbed the chance before I could chicken out. Standing by my son’s locker, I expressed my concern about telling the children that spanking was limited to “some families of color” and that I didn’t want any of the kids to have that association in their minds. She said, yes, she understood; that, in the moment, that’s what came out. I added that I respect her and felt like we should be able to have an honest conversation. I wished I’d said more, but I think she heard me, and I hope it means she won’t be using that explanation again. We hugged at the end, and I felt a sense of relief.

What did I learn? I don’t know how much of an impact it will ultimately have (it won’t stop Q’s mom from spanking her son again, for example). But in this liberal town in a blue state that’s still segregated along racial and socioeconomic lines, where rates of discipline in the schools between black and white students are unequal, and the achievement gap is glaring and persistent, the hard conversations need to happen more often. And I found that the conversation is harder in the anticipation and imagination than in the actual doing. I want to speak up, and grow through discomfort, because I would want my sons to do the same. We owe it to all our children to do better.

View all posts by diajoyce